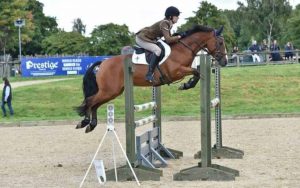 Christie Farren bought Marley from Helen Bell Equestrian as a green 5 year old.  Since then he has competed successfully in British Show Jumping to 115 opens, on the military circuit at senior level (120m) and represented Army Equitation at National and International level.

Marley has proven to be an absolute cross-country machine, making him the most incredible derby horse – he is so fast!

He has represented the Kings Troop at Royal Windsor Horse Show, show jumping for the Queen. The partnership have also consistently been selected for the UK Armed Forces team; competing annually at Hickstead.  Christie reports that he is one of the smallest ponies on the military circuit and is adored by everyone.

In the future, Christie is hoping to achieve Grade A with Marley and to continue to represent the Army.  Unsurprisingly, Marley has a home for life!